Ultrasonics is used in analytical chemistry for many common procedures, including breaking of chemical bonds, formation of free radicals, polymersion and deplymerization of long-chain molecules, catalysis of reactions (e.g. reduction, alkylation, ester hydrolysis and acylation or aromatics), preparation of catalyst, and activation of catalyst. The science of sonochemistry is well characterized and employed throughout the world.

Ultrasonics is commonly used for the releasing of enzymes and proteins from cells. This method of extraction commonly produces more active material than other methods. Disruption is often very fast and complete. In biotechnology, the manufacturing of products such as enzymes, fine chemicals, and therapeutic reagents requires the fermentation of microorganisms. The use of ultrasonics has been used in these instances for cell disruption as well enzyme purification. It helps in the lysing of bacteria, viruses, yeast and tissue cells for the extraction of protein, DNA, RNA, enzymes and other cellular components. The cup horns are high-intensity water baths that allow ultrasonic processing while preventing samples cross-contamination.

Many industrial applications require high volumes of liquids to be emulsified, dispersed, homogenized, and degassed while in the process line. This can be accomplished through the use of a continuous flow cell for in-line processing.

The pharmaceutical industry routinely uses ultrasonics for processes such as sample premixing, dispersion and suspension, crack enteric coatings for dissolution testing, tablet pressing operations to reduce tablet size, and degassing and homogenization of slurry in production. The continuous flow cell is a popular accessory for processing larger volumes up to 20 liter/hour.

Environmental testing laboratories use liquid processors to process soil and sediment samples according to U.S. EPA methods (U.S. EPA test Method 3550). This is done in lieu of Soxhlet extraction methods due to significant time and material savings. Utilizing probe ultrasonics can save hours of costly sample extractions.

Atomization - forming a mist from a liquid

Deagglomerate - to break the attractive bonds between particles

Degassing - to remove entrained and dissolved gasses from a liquid

Dispersion - to homogenize a sample

Communitation - to grind or tear

Emulsification - the blending of two samples

Hydrolyzation - a chemical reaction in which water reacts with a compound to produce other compounds; involves the splitting of a bond and the addition of the hydrogen action and the hydroxide anion from the water

ELISA - a sensitive immune assay that uses an enzyme linked to an antibody or antigen as a marker for the detection of a specific protein, especially an antigen or antibody. It is often used as a diagnostic test to determine exposure to a particular infectious agent; such as the AIDS virus, by identifying antibodies present in a blood sample

Mixing - to combine or blend into one mass or mixture

Cleaning - dislodge a foreign matter from an object. 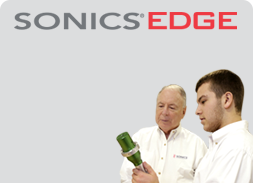